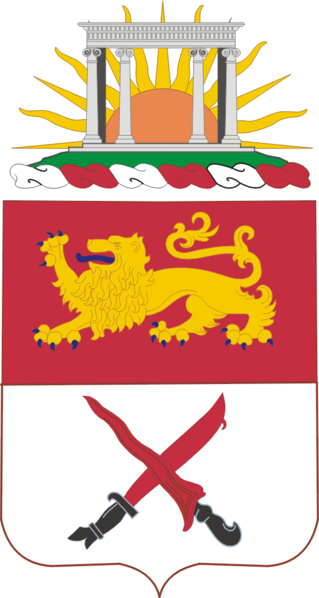 Shield : Per fess gules and argent in chief a lion passant or and in base a kris and kampilan saltirewise of the first hilted sable.
Crest : On a wreath of the colors a setting sun behind "the Golden Gate" all proper.
Motto : Tous pour un, un pour tous (All for one, one for all)

The Partition of the Shield alludes to the Old Cavalry Guidon. The Lion is form the Arms of the City of Bordeaux, France as the Regiment served in the vicinity of that City. The Kris and Kampilan symbolizes action in the Philippines. The Crest alludes to the City of San Fransisco where the Regiment was Raised in 1901. The Golden Gate was one of the few buildings left standing in San Francisco after the fire of 1906.