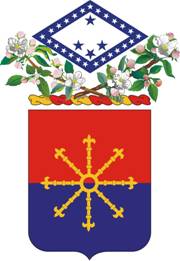 Shield: Per fess Gules and Azure, an escarbuncle Or.
Crest: That for the regiments and separate battalions of the Arkansas Army National Guard: On a wreath of the colors Or and Gules above two sprays of apple blossoms Proper
a diamond Argent charged with four mullets Azure, one in upper point and three in lower, within a bordure of the last, bearing twenty-five mullets of the second.
Motto: NEVER GIVE UP.

Literature: The Institute of Herladry, US Army