From Heraldry of the World
Your site history : 325th Infantry Regiment, US Army
Jump to navigation Jump to search 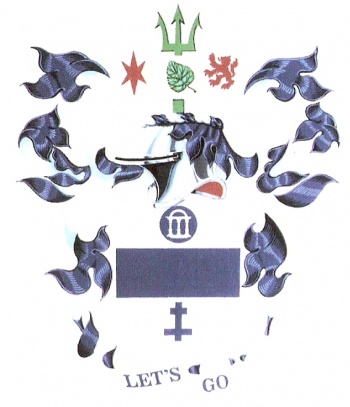 Shield: Argent , a fess azure between in chief a hurt charged with the three.columned temple of Georgia of the first and in base a Lorraine cross of the second.
Crest: On a wreath of the colors a pair of wings conjoined in lure argent, the dexter charged with a an estoile gules and the sinister with a lion rampant of the like , a trident palewise vert, the staff surmounted by a truncated pyramid of the first charged with a linden leaf of the fourth.
Motto: Let's go

Blue and White are the modern and old colours of US Infantry. The Blue roundel is from the Insignia of the 82nd Division, it is charged with the Temple from the Seal of the State of Georgia indicating orignins of the Regiment in that State. The Cross of Lorraine indicates service in Lorraine during World War I. the Wings alludes to the Gliderborne Role in World War II. The Trident alludes to Operation Neptune which launched the Invasion of Normandy in 1944. The Three tines alludes to Combat in North Africa, Scicily and the Italian Mainland prior to Normandy. The Star is from the Arms of Cherbourg and symbolizes the Regiments landing in the Cherbourg Peninsula, the Lion alludes to the Participation in Operation Market Garden at the Landing at Nijmwegen in the Netherlands. The Truncated pyramid symbolizes the Dragon Teeth Anti Tank Fortifications in the Siegfried Line. The Linden leaf symbolizes the Regiment breaking the Siegfried Line, as according to the Mythological Tale Siegfried bathed in the blood of the Dragon Fafnir to become invulenarble. However a Linden leaf landed between his shoulders and there he was still vulnerable. The Leaf also symbolizes the following occupation of Berlin.

Literature: Image and Information from https://picryl.com