From Heraldry of the World
Your site history : 4th Infantry Regiment, US Army
Jump to navigation Jump to search 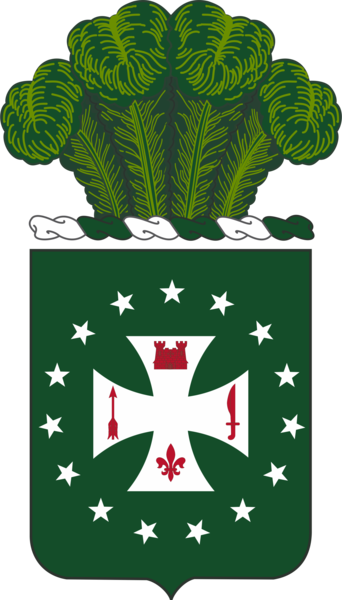 Shield: Vert a cross pateé Argent within a circle of fifteen mullets of the like the upper arm of the cross charged with a castle Gules, the lower arm with a fleur-de-lis,
the dexter with an arrow and the sinister with a bolo both paleways all of the last.
Crest: On a wreath of the colors, Argent and Vert, four plumes Vert.
Motto: NOLI ME TANGERE (Don't Tread on Me).

The green shield recalls the Mexican War. The National flag bore fifteen stars during the War of 1812. The white cross represents the service of the Regiment in the Civil War;
the arrow, the Indian Wars; the castle, the War with Spain; the bolo, the Philippine Insurrection; and the fleur-de-lis, World War I.
Prior to the approval of the coat of arms, the crest and motto were in use by the Regiment for many years.


The coat of arms originally approved on 26 February 1924. It was updated on 29 May 1959, on 14 September 1989 it was amended to correct the inconsistencies in the blazon and symbolism of the design.