From Heraldry of the World
Your site history : 55th Personnel Service Battalion, US Army
Jump to navigation Jump to search 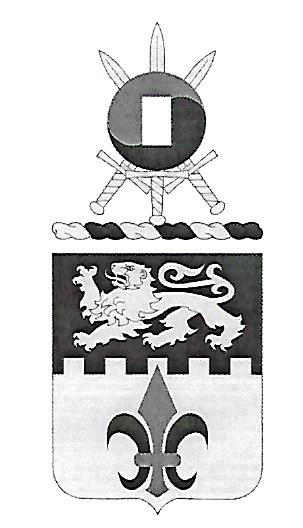 Shield: Per fess embattled Azure and Or, a lion passant of the like, in base a stylized fleur-de-lis Gules and Azure
Crest: From a wreath Or and Azure two swords saltirewise surmounted by a sword in pale points up Or, overall a Taeguk bearing a billet Argent
Motto: Always there in support

Dark blue and scarlet are the colors traditionally associated with the Adjutant's General Corps. The lion, battlements and fleur-de-lis commemorates the unit's campaign credits
and baptism of fire in World War II in Europe. The fleur-de-lis with an arrowhead symbolizes the campaign in Southern France. The lion symbolizes Rome.
The battlements underscore strong support and defence and reflect the castles of Central Europe. The Three Swords in the Crest symbolizes the three Korean War decorations.
The Taeguk is a symbol of Korea and the bilett symbolizes personnel records and the Battalion's processing of information. The Coat of Arms was approved on 13 February 1996,
it was amended to add the symbolism of the Crest on 5 November 2001.