From Heraldry of the World
Your site history : 7th Field Artillery Regiment, US Army
Jump to navigation Jump to search 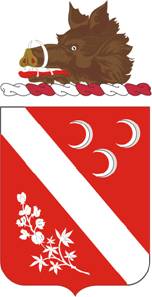 Shield: Gules, a bend Argent, in chief three increscents, two and one of the last; in base a seven blossom Lupinus Texensis of the second.
Crest: On a wreath of the colors Argent and Gules, a boar's head erased Proper.
Motto: NUNQUAM AERUMNA NEC PROEILO FRACTUM = Never Broken by Hardship or Battle.

The shield is scarlet for Artillery. The three silver increscents are taken from the arms of Luneville where the Regiment received its baptism of fire. The seven blossom Lupinus Texensis (Blue Bonnet), the state flower of Texas, denoted the birthplace of the Regiment and its numerical designation in the Field Artillery regiments of the United States Army. The boar's head, upon the crest, in its natural colors, is indicative of Regimental hospitality. The motto is taken from a citation in France by Marshal Foch, to the entire 1st Division, of which the 7th Field Artillery was a part, in which he states "Never Broken by Hardship or Battle."