From Heraldry of the World
Your site history : 80th Field Artillery Regiment, US Army
Jump to navigation Jump to search 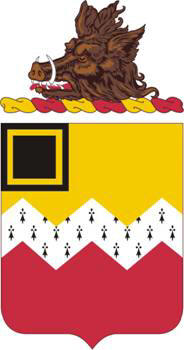 Shield: Party per fess Or and Gules, a fess dancetté ermine. On a canton Sable an orle of the first (from the coat of arms of the 11th Cavalry).
Crest: On a wreath of the colors Or and Gules, a boar’s head Proper.
Motto: TOUJOURS L’AUDACE.

The dual character of the regiment is shown by the colors of the field, yellow for cavalry, red for artillery.
The fess dancetté is taken from the arms of the Oglethorpe family, also the boar’s head crest, which in addition is the ancient symbol of hospitality.
The arms of ancient Brittany was a shield of ermine, and ermine figures prominently in the arms of Vannes; this is shown by the tincture of the fess.
The parent organization is shown on the canton.