From Heraldry of the World
Your site history : 9th Cavalry Regiment, US Army
Jump to navigation Jump to search 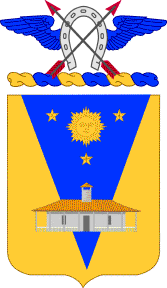 Shield : Or, on a pile azure in chief a sun of eight points of rays between three five-pointed mullets two and one of the field,
in base over all the block house of San Juan Hill, Santiago, Cuba, proper.
Crest : On a wreath of the colors a horseshoe with nine nail holes heels down argent winged purpure debruised by two
arrows in saltire sable armed and flitted gules.
Motto : We Can, We Will.

The Pile with sun and stars allude to the Flag of the Philippine Insurrection. The Block House at San Juan was captured by the Regiment in 1898.
The Winged Horseshoe symbolizes the alertness of the mounted man. The Arrows symbolizes participation in the Indian Wars.