From Heraldry of the World
Your site history : 9th Field Artillery Regiment, US Army
Jump to navigation Jump to search 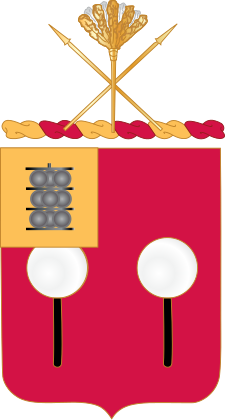 Shield: Gules two puloulou palewise Proper (a ball Argent on a staff Sable), on a canton Or a stand of grape shot Proper (for the 1st Field Artillery).
Crest: On a wreath of the colors, Or and Gules, an alia (crossed Hawaiian spears) supporting a puela with nine plumes, five of Gold and four of Silver, Gold and Silver alternating (the flag of the Hawaiian Chief) all Proper.
Motto: Kulia-i-ka-nuu = Hawaiian meaning "Strive to Reach the Summit."

The 9th Field Artillery Regiment (parent organization of the 9th Field Artillery Battalion) was organized in 1916 in Hawaii from the 1st Field Artillery. This descent is shown by the stand of grape shot in the canton, taken from the coat of arms of the 1st Field Artillery, which commemorates General Taylor’s famous remark to the battery commander in the old regiment at Buena Vista, "A little more grape, Captain Bragg." The place of origin and first station of the 9th Field Artillery Regiment are depicted in the remainder of the arms: The shield is red for Artillery. The two Hawaiian puloulou—a blackstaff with a white ball—were ancient emblems of the country and were placed on each side of the gateway to the king’s quarters. The crest is an alia, the two crossed spears which were placed in front of the king’s house. The puela, the duster-like flag of the king, is drawn with nine plumes, five gold and four silver, indicating the number of the organization.