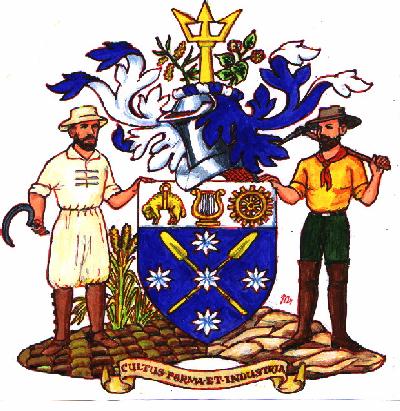 Arms' : Azure, two Oars in saltire Or surmounted of a Mullet of eight points Argent and between four like Mullets in Cross also Argent, on a Chief of the last a Lyre between a Fleece and a Cogwheel all proper.
Crest : On a Wreath of the Colours the head of a Trident erect Or between on the dexter a sprig of Golden Wattle and on the sinister a sprig of Begonia both proper.
Supporters : On the dexter side a Farmer and on the sinister side a Miner both in mid-nineteenth century costume, the Farmer holding in the exterior hand a Sickle and the Miner holding in the exterior hand a Pick with the shaft resting on his shoulder all proper.
Motto: 'Cultus Forma et Industria'.

The five stars on a blue field alludes to the miners' flag with the Southern Cross flown at Bakery Hill on 29 November 1854, four days before the Eureka Stockade battle. This flag heralded an Australian nationalism, and formed the basis for the subsequent national flag.

The crossed oars refer to Lake Wendourie as a rowing centre, especially as the venue for rowing events in the 1956 Melbourne Olympic Games.

The fleece and cogwheel refer respectively to rural and industrial activities in the local economy, while the lyre denotes the City's promotion of the Arts, including competitions in music of the Royal South Street Society. In the Crest the trident refers both to Britannia, and to aquatic sports, while the wattle celebrates Australia and the begonia acknowledges the local Begonia Festival. The supporters allude to the part played by gold miners in the early years, and the consolidation of the City and district by farmers, many of whom had first been miners.