From Heraldry of the World
Your site history : Barrie
Jump to navigation Jump to search 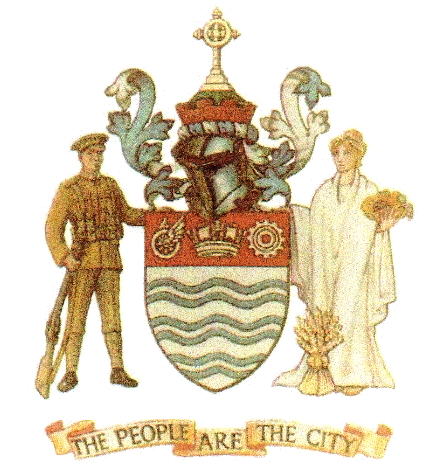 Arms: Argent three bars gemel wavy Azure, on a chief Gules a naval crown between a winged wheel and a cog wheel Or
Crest: Issuant from a mural crown Gules, a mount Vert thereon a mercat cross Or
Supporters: Dexter a private soldier in the uniform of the Canadian Army of the First World War standing easy with a rifle supported by the dexter hand, sinister the goddess Ceres proper vested argent wreathed about the temples with a garland of corn ears Or holding in the sinister hand a basket of fruit proper at the feet a garb Or
Motto: THE PEOPLE ARE THE CITY