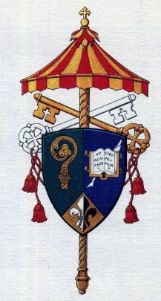 The crosier is taken as a symbol of St. Peter, the book and sword for Saint Paul. The book represents the Latin version of the Bible opened to Saint Paul's letter to the Romans which begins with the words: Ad Romanos Caput Primum.

The blue is the symbol of Saint Mary, the patron saint of the Diocese of Portland.The fleur-de-lys is also a symbol of St. Mary, but it also refers to the French Canadian heritage of the people who built the Church of Saints Peter and Paul and, when depicted half silver and half black, is also one of the most important emblems of the Order of the Preachers of Saint Dominic.

Behind the shield are the papal insignia.