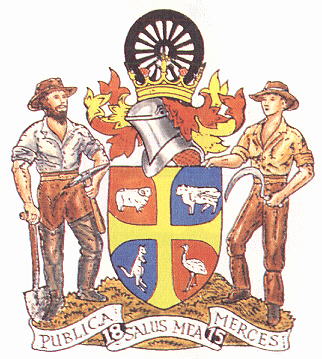 Arms : Quarterly Gules and Azure, a Cross paty throughout Or, between in chief a Merino Ram contournee and a Hereford Bull, and in base a Kangaroo also contournee and an Emu all proper.
Crest : Issuing out of a Coronet composed of Wattle Flowers and Nuggets of Gold proper, set alternately upon a rim Or, a Railway Wheel also proper.
Supporters : On the dexter side a Gold-Miner supporting with the exterior hand a Spade and holding in the other hand a Pick all proper, and on the sinister side a Husbandman holding in the exterior hand a Sickle and resting the interior foot upon a Garb also proper.
Motto: 'Publica Salus Mea Merces'.

As the first payable gold in Australia was found at Ophir near Bathurst in 1851 a great influx of miners came to search for gold and later settled on the land, represented by the Miner with a shovel and a Husbandman with a sickle. The area round Bathurst was very suitable for rearing Merino sheep and Hereford cattle (as well as growing cereals, fruits and vegetables).

The kangaroo and emu which previously abounded in the district were driven west. Bathurst later became a large railway town with extensive workshops. The crest is a railway wheel issuing from a coronet alternating wattle flowers and gold nuggets.