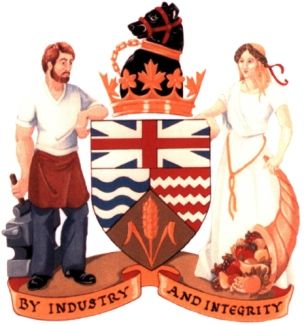 The base of the arms shows an ear of barley, that refers to the Saxon origin of the name, from Bere-wick , a storehouse for barley. The chevron represents the roof of the storehouse. The blue and white wavy bands symbolize the Annapolis and Cornwallis Rivers. The zigzag lines represent locally produced electricity. The chief shows an old version of the British flag (Union Jack), as used from 1606 to 1801 A.D. to commemorate the early settlers of United Empire Loyalist stock.

The arms are crowned with a special crown with maple leaves (for Canada) and trailing arbutus (mayflowers) for Nova Scotia. The crest shows a bear, taken from the arms of Berwick in England.

The supporters are a local blacksmith and the godess Ceres. The blacksmith symbolises the local industry, Ceres symbolises agriculture. The motto "By Industry and Integrity" is the motto which roots the town to its past, but also guides to present and future.