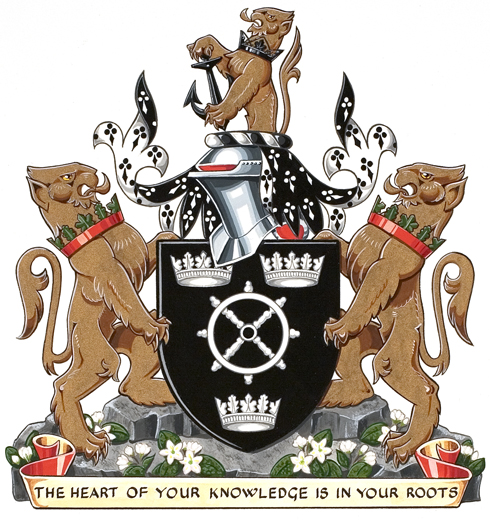 The appearance of the shield portrays directly the nature and purpose of the Black Loyalist Heritage Society. The shield’s background is black. Loyalist civil coronets allude to the vast majority of people fleeing on fleets of ships who were non-combatants. The ship’s wheel is taken from the emblem in use for some time, and represents the ship bringing the settlers to their new homes. On one hand, the wheel represents the past, alluding to the ships of the landing in 1783. On the other hand, it represents the present, alluding to the Society’s role of community development, with the various interests meeting together and steering towards a goal.

The lion and coronet represent the soldiers under the banner of the Crown whose actions allowed the people to settle in Nova Scotia. The anchor alludes to the sacrifice of the families that required them to raise anchor in their previous home and set down in their new home. The mantling shows ermine spots to represent apparent footprints symbolising the trek the settlers had to make.

The lions, symbol of the pride of Africa, demonstrate courage, since the people needed that quality to face the hardships and to start a new life. The two coronets are shown red and green, which, together with black and gold, are the colours of Africa. Each coronet can represent new life emerging from sacrifice. The rock is the land area around Birchtown where the settlers landed in Nova Scotia, represented by the provincial flower, the mayflower.

This motto speaks to the interest in their heritage displayed by the Black Loyalist Heritage Society members.