From Heraldry of the World
Your site history : Brighton (South Australia)
Jump to navigation Jump to search 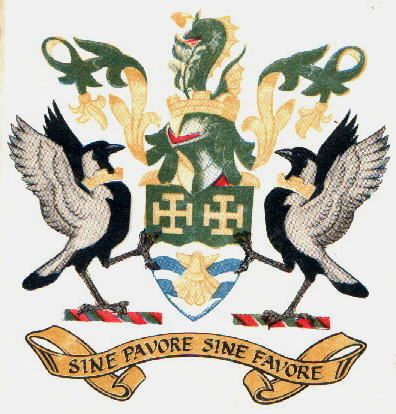 The potent cross is an ancient symbol of care for the sick and the aged, and as such the badge of the Hospitaller Knights of the Holy Sepulchre. It indicates the City's commitment to care for the elderly and sick within its area.
The wavy section refers to Gulf St Vincent, the western boundary of the City and the scallop shell was formerly on the seal of the early District Council. The dolphin is drawn from the arms of Brighton in Sussex, and here supports a sprig of the native peach or Quandong, which once grew in the district.

The supporters are the same as the magpie on the State arms and badge of South Australia, including the perch of a red/green striped staff from a Eucalyptus tree.

The Mural crowns used for difference, as well as a crest coronet, signify local government, with each crenellation representing a ward of the City.

Literature : Image and background provided by Denis Towner, based on leaflet published by City of Brighton, provided by Holdfast Bay Council,