From Heraldry of the World
Your site history : British Pain Society
Jump to navigation Jump to search 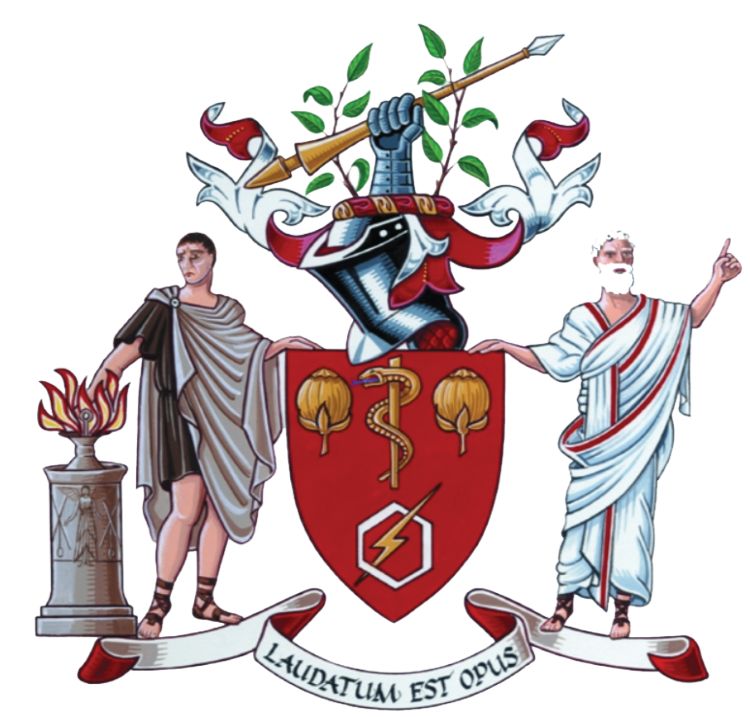 Arms : Gules in chief a Rod of Aesculapious between two Poppy Heads Or and in base a Benzene Ring Argent interlaced by a Flash of Lightning in bend sinister Gold.
Crest : Crest upon a Helm on a Wreath Or and Gules a dexter Gauntlet erect grasping a Lance in bend sinister Or the point Argent all between two branches of Willow proper. Mantled: Gules doubled Argent.

The arms were officially granted on May 2, 1995. Supporters added ?

The rod of Aesculapious on the shield is self evident for a medical society and the poppy heads represent the use of opium-based drugs, such as Morphine and Heroin, which are used in the treatment of severe pain, especially cancer pain.

Consultants in Pain Management sometimes need to destroy nerves using chemicals called neurolytic agents. The most commonly used chemical is Phenol, the chemical structure of which is based on the so-called Phenol Ring, which is represented, heraldically, by the hexagon (described in the blazon as a Benzene Ring).

The flash of lightning represents the use of electricity in pain management, e.g. in electrical acupuncture and in radiofrequency, a procedure which uses an ultrafast current which makes the molecules in the tissues oscillate thereby generating heat with which nerves can be destroyed.

Ihe lance in the crest represents the (rather large) needles which are used to inject joints, nerves, etc., in the quest to subdue pain. The branches of willow are used symbolically to represent extensively used pain killing and anti-inflammatory drugs such as Aspirin, which is originally derived from willow bark.

The motto 'Laudanum Est Opus' is based on the Hippocratic dictum 'Divinum est opus sedare dolorem' i.e. 'Divine is the work to subdue pain', 'Laudanum'being used to mean'praiseworthy'.