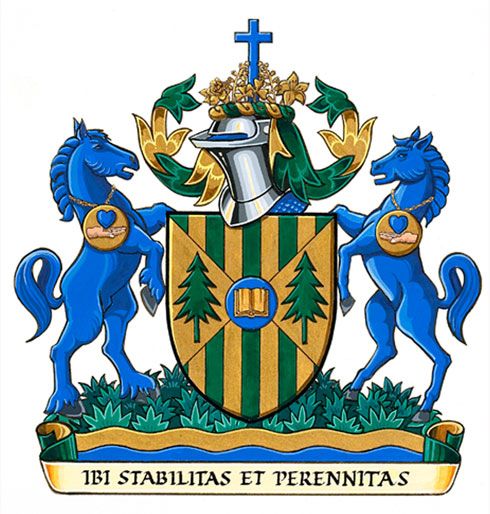 Arms: Per saltire Vert and Or, in chief and in base four pallets, in each flank a pine tree counterchanged, at the fess point a hurt charged with an open book Or
Crest: Issuant from a wreath of roses, heather, trefoils and lilies Or, a cross Azure
Supporters: Dexter a heavy horse sinister a riding horse Azure each gorged of a chain Or pendent therefrom a bezant charged with a heart Azure resting on a hand proper, the supporters standing on a grassy mound Vert set on barry wavy Or and Azure
Motto: IBI STABILITAS ET PERENNITAS

The arms were officially granted on December 15, 2005.

The elements of the shield symbolize the natural environment and riches of Bury. The vertical bands symbolize agriculture, while the pine trees represent the forestry industry. The blue roundel is a symbol of convergence, gathering and unity. Charged with a book, it represents not only education, but also the town’s history, its past, present and future.

The crest, consisting of a simple cross, represents the fact that there are several religions denominations in the town: Catholic, Anglican, Methodist, United, Presbyterian, Baptist and Adventist.

The horses evoke the agricultural and military heritage of the municipality of Bury. Their collars are adorned with the symbol for volunteerism, honouring the municipality’s many volunteers. The compartment heraldically represents the many watercourses in the region.

The motto means “In this place there is stability and continuity.”