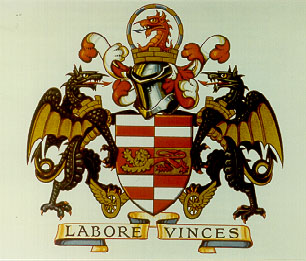 The suburb was probably named after John Caulfield, an early Melbourne builder, and the Council assumed the Arms of the Irish noble family of Lord Caulfeild, Viscount Charlemont. On application to the College of Arms, a differenced version was granted, utilizing only the Arms on the 1st and 4th quarters (Caulfeild) moving the lion from the canton to a fess, and counterchanging the red and white bars. The dragons were changed from red with black wings to black with gold. Among other changes are the mural crowns on the crest and gorging each dragon supporter, and the winged wheels.

The Latin motto Labore Vinces — By our labours we shall conquer — is incorporated in the banner.


Literature : Information provided by Denis Towner (dtowner@midcoast.com.au), from a leaflet used for the presentation and dedication of the Caulfield armorial ensigns and city banner, provided by Glen Eira City Council.