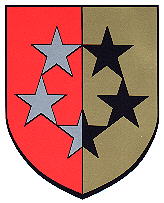 Consdorf was first mentioned in the 10th century as a possession of the St. Irmine Abbey in Trier. Later the village became a possession of the Lords of Beaufort. The red and gold colours are derived from the arms of the Beaufort family. The five stars symbolise the five villages in the municipality.