From Heraldry of the World
Your site history : Cruiser USS Thomas S. Gates
Jump to navigation Jump to search 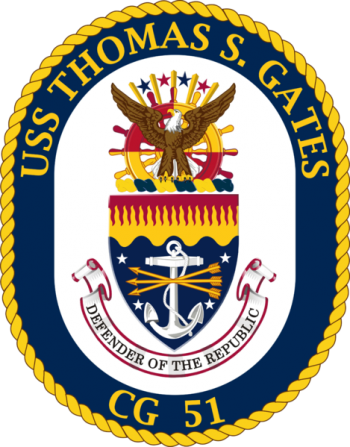 The upperpart of the Shield symbolises the World War II Service of the Namesake Hon. Thomas S. Gates, Jr. Indicating the serverity of the Japanese Kamikaze Attacks at Lingayen, Iwo Jima and Okinawa. The Anchor and Stars are from the Flag of the Secretary of the Navy indicating Gate's tenure as Under Secretary and Secretary of the Navy. The Arrows indicates His subsequent terms as Deputy Secretary and Secretary of Defence. The Eagle symbolises Gate's leadership as Secretary of Defence during a period that heralded technological changes from guns to missiles, conventional power to nuclear, piston to jet arcraft engines, and the beginning of space exploration. The era of change is indicated by the alternating colours of the Wheel. The Stars symbolises Mr Gates last public service as head of the U.S. Liasion Office to the People's Republic of China.