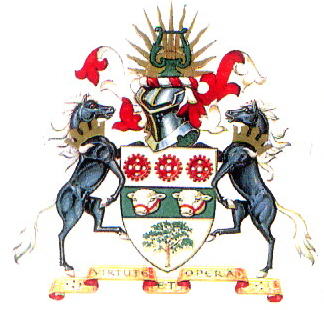 Arms : Argent, on a fess vert, between in chief three gear wheels, each with five circular holes in cross gules, and in base a red gum tree proper, the heads of two Hereford Poll cattle, couped close, proper, banded gules.
Crest : a lyre vert, stringed gules, in front of a demi sun Or.
Supporters : two horses sable, crined argent and gorged with a crown vallary Or
Motto: Virtute et Opera

The shield portrays from base to chief the development of Dandenong, since its beginning about 1865. The red gum forests used to cover the area, and, when cleared, cattle were raised. In the modern era the city is known for its variety of modern industrial plants, represented by the gear wheels.

The rising sun in the crest suggests that this phenomenal rise is only just a beginning of the City's development. The lyre alludes to the annual three-week Dandenong Festival of Arts and Music.

The value of horses in the pioneering days, when Dandenong was the 'Gateway to Gippsland', is recalled in the two supporters, which also refer to the importance of weekly horse sales in the modern era.