From Heraldry of the World
Your site history : Destroyer USS Pinckney (DDG-91)
Jump to navigation Jump to search 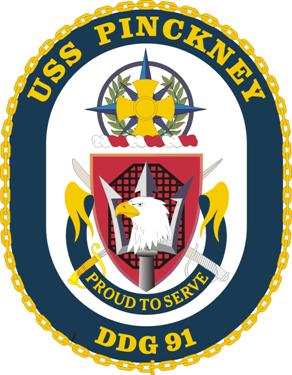 Seal. BLAZON - SHIELD: Gules, on a grid shaped as an Aegis shield Sable the head of a trident issuing from base Argent (Silver Gray); overall a bald eagle’s head erased Proper. CREST: On a wreath Argent and Gules a laurel wreath Proper surmounted by a demi-compass rose Celeste; overall a stylized Navy Cross Or. MOTTO: A scroll Azure fimbriated and inscribed “PROUD TO SERVE” Or. SEAL: The arms as blazoned in full color upon a white oval enclosed within a dark blue collar edged on the outside with a gold chain of ninety-one links and one locking link (a canting reference to the sip’s designation as DDG 91) with the name “USS PINCKNEY” above and “DDG 91” below in gold letters.

SHIELD: Gules (Scarlet) denotes courage and sacrifice. The black grid shaped like an Aegis shield refers to the destroyer class to which the Pinckney belongs and its state of the art equipment and armament. It also suggests a mess grill, symbolizing the duties of William Pinckney as Navy Cook Third Class aboard the USS Enterprise at the time of his heroic act in saving his shipmate. The trident symbolizes authority at sea. The eagle’s head denotes vigilance, resolve and seagoing defense of the United States. White (Argent) indicates integrity; black (Sable) signifies strength and fortitude. CREST: The Navy Cross indicates the award for heroism made to William Pinckney for his exemplary actions under fire in saving the life of a fellow sailor during the battle of Santa Cruz. The compass-rose signifies navigational expertise and global action during World War II. The wreath of laurel represents honor and achievement.