From Heraldry of the World
Your site history : Differdange
Jump to navigation Jump to search 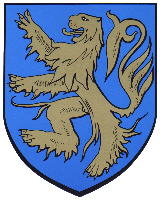 The arms are much older though, and were already used by the medieval Lords of Differdange. They descended from the Lords of Soleuve, who used a black lion in a silver field.