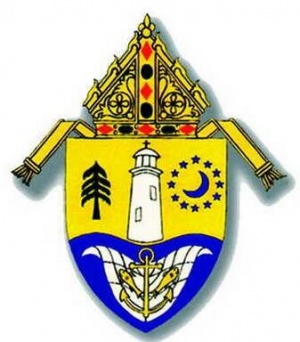 These arms are composed of a gold field on which is displayed a silver lighthouse; the famous landmark of Biloxi. The lighthouse of Christ, the beacon of Peace and Truth, is placed between a pine tree, emblematic of the logging and forestry industries of the northern portion of the diocese near Hattiesburg and Laurel, and a blue crescent, surrounded by twelve blue stars, emblematic of the Blessed Virgin Mary, titular of the Cathedral-Church in Biloxi, who is described in the 12th Chapter of the Book of Revelation, as having “the moon at her feet and upon her head a crown of twelve stars.”

The base of the diocesan arms is a blue, wavy field, to signify the waters of the Mississippi River and the Gulf of Mexico, where the See city is located. On this field is a displayed fishnet to honor the city’s fishing industry, equally represented by the gold anchor and two fish that are held within the fishnet.