From Heraldry of the World
Your site history : Diocese of Chester
Jump to navigation Jump to search 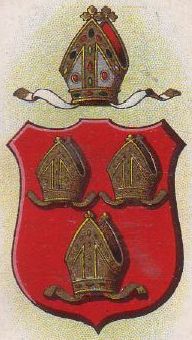 It it assumed that these Arms was that of the local Abbey of Benedictine Nuns, that was suppressed during Henry VIII.
The Abbey Church become the Cathedral of the new Diocese.

Literature : Image from Wills's Arms of the Bishopric. E.E. Dorling: Heraldry of the Church a Handbook