From Heraldry of the World
Your site history : Diocese of Motherwell
Jump to navigation Jump to search 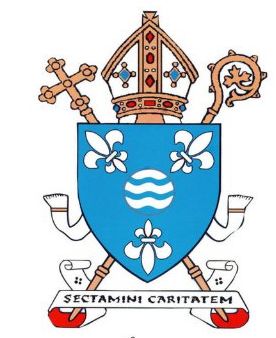 Azure, a fountain between three fleur-de-lys in pairle, that in base reversed Argent; behind the Shield are palced in saltire an Episcopal cross and a crosier Or and above the Shield is placed a precious mitre proper, and in an Escrol below the Shield this Motto "SECTAMINI CARITATEM".

The zrms are canting, the fountain = Well, the Fleur de Lys = the Mother that is St Mary. Granted by Lord Lyon King of Arms 25 april 1990.