From Heraldry of the World
Your site history : Diocese of Ogdensburg
Jump to navigation Jump to search 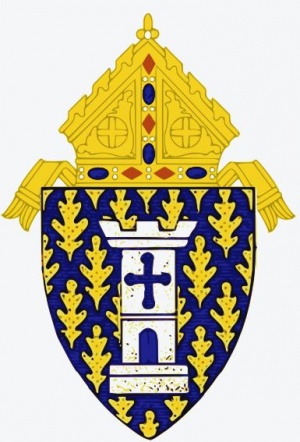 Ogdensburg was the site of a French mission of ¨La Présentation´, founded in 1749 by Abbe Francois Piquet to minister of the Iroquois. After the demise of New France the British refurbished Fort La Presentation and renamed it Fort Oswegatchie. It was held by them until 1796. The settlement that developed around the fort was named after Samuel Ogden (1743-1798), a New Jersey lawyer, who bought land there. The oak leaves are a canting element, as the name Ogden, is derived from 'oak-dene'. The Ogden family also used oak leaves in their arms. The -burg part is represented by a tower (burg meaning fortress), which thus also represents Fort Oswegatchie.