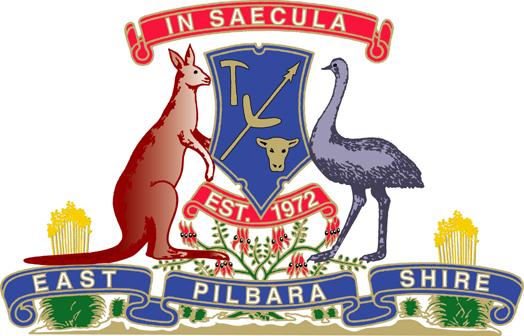 The arms are unofficial.

The charges on the shield are a miner's pick for the huge iron ore mining in this area, a bullock's head for the beef cattle industry, and a spear in saltire with a boomerang representing the indigenous people.

The supporters, a Kangaroo and an Emu are the same as in the national Arms, but are still plentiful in this outback district. Below the shield are Sturt's Desert Pea plants in bloom, a plant found in the arid regions, though the State emblem of South Australia, rather than Western Australia. Behind the supporters are wheat plants, although grain-growing in this marginal area is subject to drought.