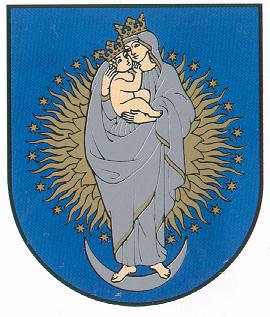 Eišiškes was first mentioned in the 16th century and was probably founded by a Eikšys or Eišys, hence the name. In the late 18th century the town probably received city rights, as it was mentioned as a city in 1792. There are no official arms or seals known for the city until 1935. In 1935 the local council applied to the Polish Ministery of Internal Affairs (the city belonged to Poland at the time) with the following design : three crossed green fir branches bearing golden cones on a golden field.

These arms were based on the local legend of the founding and the name of the city. The legend mentions that when the town acquired market rights the local landlord promised that everything that was brought to the market, no matter what it was, would be purchased. One peasant brought a large sack of cones, which nobody wanted to buy. So he went to the landlord and reminded him of his promise. The landlord promised to buy them, but told the peasant to bring the cones, one-by-one, to the local granary. The angry and weary peasant began to yell in Polish, while carrying the cones, "Ej, szyszki, ej, szyszki" ("oh cones, oh cones").
For a long time the local fountain was decorated with some fir cones.

As there was no historical evidence for the background of the arms, the proposal was rejected. No arms were granted and a new proposal was made after the renewed independence of Lithuania. The local population was in favour for the image of the St. Mary with child, the local patron saint.