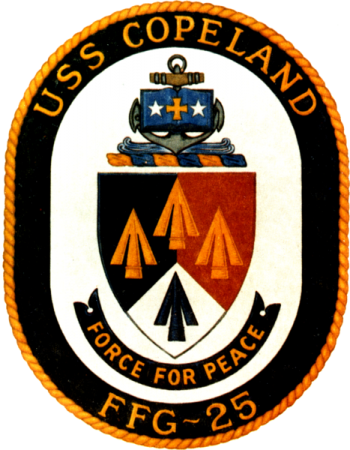 The Coat of Arms for USS Copeland (FFG-25) symbolizes RADM Robert W. Copeland, USNR, career. The arrowheads are symbolic of attack and referred to the capabilities of USS Copeland (FFG-25). They were arranged to simulate an escort in reference to Admiral Copeland's World War II service aboard the USS Samuel B. Roberts (DE-413) where he helped turn back the enemy during the assaults at Samar and Leyte, Philippines. Blue and gold are the colours associated with the U.S. Navy. Red, white and blue are the national colours of the United States. Red, blue, white and gold are the colours in the Philippine flag. The stars refer to Admiral Copeland's highest rank and the cross pattee denoted the award of the Navy cross for heroism during the assault in the Philippines during WW II. The blue book (Bluejacket's Manual) referred to the enlisted men whom he praised after the Battle off Samar at Leyte Gulf. The anchor and splash of water referred to his early and long interest in the United States Navy.