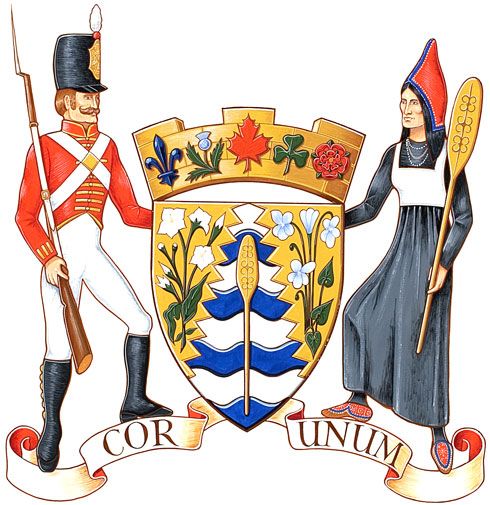 Arms: Or on a pile throughout indented issuing from base barry wavy Argent and Azure a Maliseet oar in pale Or between on the dexter a sprig of potato plant (Tuberum solanum) and on the sinister a sprig of violets (Viola cuculata) both slipped and leaved all proper
Crest: On the rim of a mural coronet of three merlons Or from dexter to sinister a fleur-de-lis Azure a thistle slipped and leaved proper a maple leaf Gules a trefoil Vert and a rose Gules seeded Or barbed Vert
Supporters: On the dexter a soldier of the 104th Regiment of Foot (New Brunswick Regiment) ca. 1810 habited and holding a rifle proper on the sinister a representation of Malobeam in Maliseet dress proper holding an oar Or
Motto: COR UNUM

The waterfalls in the St. John river, from which the name of the city is derived, is shown in the center of the shield. The local Maliseet Indians called the falls the 'destroyer place'. This is symbolised by the indentations on the sides of the pile. These also symbolise the many sawmills which were once numerous around Grand Falls.


On the right side of the falls is a white potato plant, which symbolises the main industry in the town. The purple violets on the left side are the flower symbol of the State of New Brunswick.


The oar in the falls is a symbol for the Maliseet and Micmac Indians. The symbol is taken from an Indian legend, in which Malobeam led a group of her people over the falls, to escape from the Iroquois who followed her. This is further emphasised by her image as the left supporter.


The right supporter represents a soldier in the uniform of the 104th New Brunswick Regiment of Foot, which played a major role in the establishment of Grand Falls as a military post in 1791.

On the mural crown are symbols for the countries from which the early settlers originated : a fleur-de-lis for France, a thistle for Scotland, a shamrock for Ireland and a rose for England, with the Canadian maple leaf in the centre.


The motto means With one heart.

Literature : Information provided by the city of Grand Falls/Grand Sault, 1999.