Grand Lodge of Newfoundland and Labrador

GRAND LODGE OF NEWFOUNDLAND AND LABRADOR 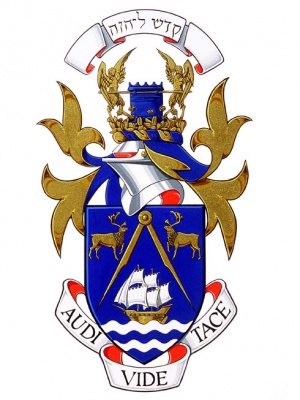 Arms : Azure upon two bars wavy Argent a ship Or sails Argent inside an open compass between two caribou passant respectant all Or
Crest : Issuant from a circlet of pitcher plants Or the Ark of the Covenant Azure handles Or supported by two seraphim also Or
Mottoes : (in Hebrew) and AUDI VIDE TACE

The arms were officially granted on February 22, 2000.

The shield in blue represents the North Atlantic Ocean surrounding Newfoundland and Labrador. The compasses, in gold, are a Masonic symbol. The caribou represents the two parts of the province, Labrador, the home of the largest free-ranging herd in the world, and the Island, where caribou also roam. The sailing ship signifies the province’s strong connection with the sea, as well as the ties of the Grand Lodge of Newfoundland and Labrador with Great Britain.

The Ark of the Covenant with its cherub supporters is traditionally used as a crest by Masonic Grand Lodges. Here it appears in the colours of the arms within a wreath of pitcher plants, the provincial flower of Newfoundland and Labrador.

The Latin phrase below the shield means “Hear and see but keep your counsel”.

Above the shield, the sentence in Hebrew characters means “Holiness to the Lord”.