From Heraldry of the World
Your site history : Grevenmacher
Jump to navigation Jump to search 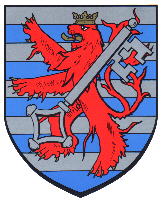 The arms show the lion and bars of the arms of the Grand-Dukes of Luxembourg, who acquired the city in 1252. The key was added in the 14th century as a symbol to distinguish the arms from those of the city of Luxembourg. The meaning or origin of the key is not clear, it may be a symbol of a fortified city, of a patron saint, or as a symbol for Grevenmacher as a 'key-city'. The first seal of the city was granted in 1357 and showed the above arms. The arms have thus not changed since, except for the number of the bars, which has varied widely during the centuries.