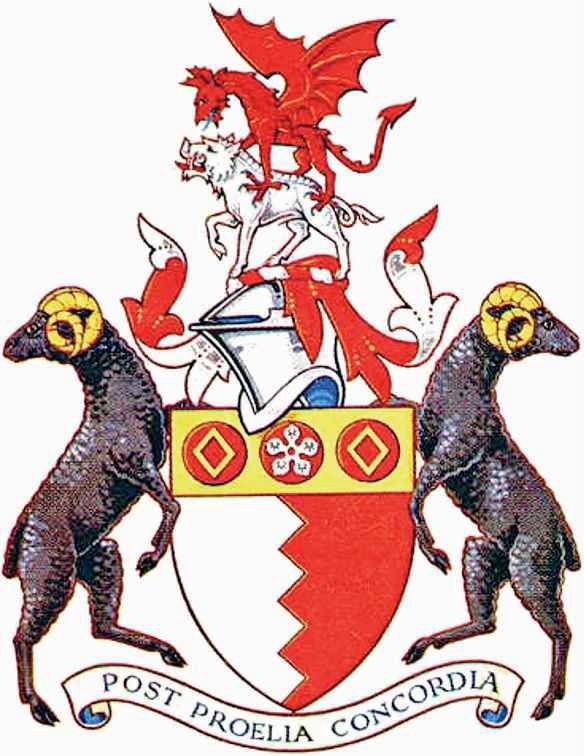 Arms : Per pale indented Argent and Gules on a Chief Or three Torteaux that in the centre charged with a Pierced Cinquefoil Ermine the others each charged with a Mascle Or.
Crest : On a Wreath of the Colours a Dragon Gules preying on a Boar passant Argent.
Supporters : On either side a Ram reguardant Sable armed Or.
Motto: 'POST PROELIA CONCORDIA'- After the battle, concord.

The arms were officially granted on 15 November 1974.

The silver and red indented field was the arms of the Honour of Hinckley as borne by Simon de Montfort. The gold chief comes from the arms of the Dixie family of Market Bosworth. the three red discs come from the arms of Grey. These are charged with the cinquefoil of the Earls of Leicester and the mascles of the Ferrers family.

The crest recalls the historic Battle of Bosworth in 1485, which resulted in the victory of Henry VII over Richard III, and the establishment of the Tudor dynasty. Richard's badge was a white boar, and here it is being attacked and defeated by the red dragon badge of Henry.

The supporters suggest the sheep rearing of the district, and also resemble the supporters of the Earl of Harborough.

The motto - POST PROELIA CONCORDIA - means after conflict, peace. This refers to the peaceful history of the district since 1485.