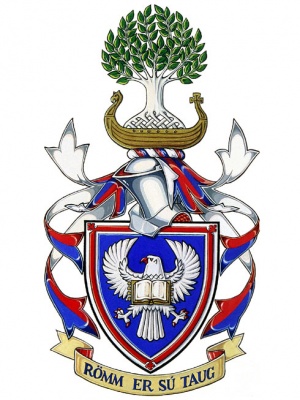 Arms : Azure a falcon displayed Argent charged with an open book also Argent bound and edged Or on a bordure Argent an orle the three angles erablé Gules
Crest : Issuant from a longship Or a representation of the World Ash (Yggdrasil) Argent leaved Vert its roots in a Celtic interlace pattern
Motto: RÖMM ER SÚ TAUG

The arms were officially granted on January 1, 2000.

The white falcon on a blue field was originally used in the 14th century and was part of the arms of King Erik of Pomeria, ruler of Denmark and Iceland. White and blue are also Iceland’s national colours. The red border and maple leaves honour Canada where many Icelandic immigrants have prospered. The colour red is also a reference to fire and recalls Iceland as a land of fire and ice. The open book symbolizes the League’s mandate to preserve and promote literacy and learning in the tradition of Icelandic sages and the language.

The Norse longship denotes both the Nordic derivation of the Icelandic people and the early discovery of America near the coast of Newfoundland by Icelandic mariners circa 1000 A.D. The cross at the stern recalls the Christian tradition of Icelandic people. The Nordic/Celtic tracery echoes the motto and suggests the deep cultural and historical origins enjoyed by the League both in their homeland and in Canada. The tree of life or World Ash (known as Yggdrasil) refers to the strong family and genealogical interest found in the Icelandic heritage.

The Icelandic phrase means “Strong is the bond” and reflects the themes of the crest.