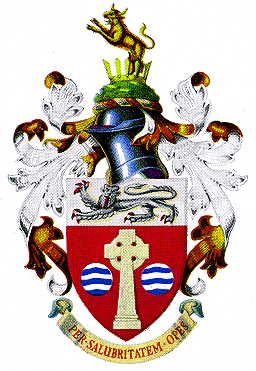 Arms : Gules a Stone Celtic Cross proper between two Fountains on a Chief Argent a Lion passant guardant Sable armed and langued of the first.
Crest : On a Wreath Argent and Gules a Mount of Rocky Moorland proper thereon issuant from a Crown Palisado Or a Bull salient Gules the horns Gold.
Motto: 'PER SALUBRITATUM OPES' - Through health, wealth

The arms were officially granted on December 4, 1956.

The heraldic fountains represent Ilkley township with its wells, Ben Rhydding, and the River Wharfe. The cross represents Burley and is a copy the cross erected there in memory of the Rt Hon. W.E. Forster, of Burley, MP for Bradford, who obtained the passing of the Education Act 1870, and thus secured free education for all children.

The black leopard is from the heraldry of the Fairfaxes of Denton Hall - Colonel Charles Fairfax, third son of the first Baron Fairfax of Cameron, resided at Menston Hall where it is believed Oliver Cromwell and General Sir Thomas Fairfax dined on June 30, 1644, two days before the decisive Battle of Marston Moor.

The mount in the crest stands for the local rocky moors and the old Roman fort is typified by the crown which is fashioned like a palisade. The leaping bull refers to the builder of this fort, Julius Agricola, who was known as "The Bull", which is also an indirect reference to the Cow and Calf Rocks, a well-known local feature.

The motto has reference to Ilkley as a health resort and spa.

The arms are currently used by the parish council.