Difference between revisions of "James & Co. - Coats of arms of countries"

From Heraldry of the World
Your site history : James & Co. - Coats of arms of countries
Jump to navigation Jump to search

Coats of arms of countries 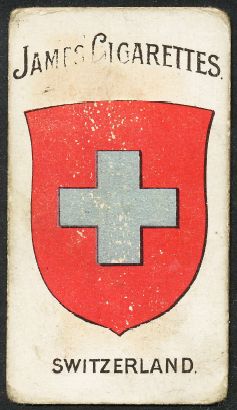 James & Co was a cigarette company based in Birmingham, UK. I have no further information on the company.

The cards issued have a similar design as used on the EFA Postcards and many Dutch trade card series. Those series also show the flags of the countries, the James' cards only the coat of arms. The other series also have 72 cards, this series only 20. Murray describes the cards as medium sized (80x52 mm), but the cards I know about are standard size (68x40 mm).

A modern reprint series has been published in a larger size.