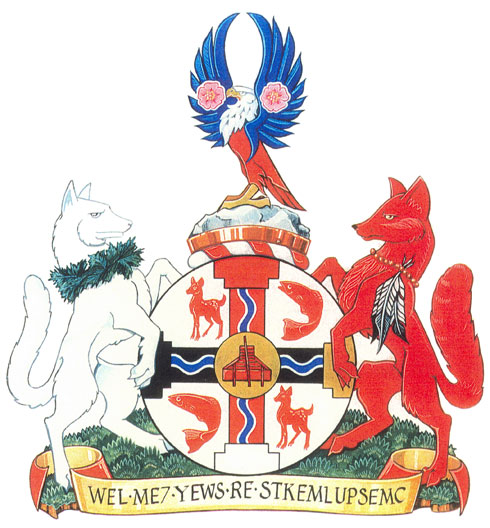 Arms: Argent a cross throughout potent grady of two the vertical arms Gules the horizontal arms Sable charged with a cross wavy Azure edged Argent surmounted at the crossing by a bezant thereon a representation of the supports of a winter lodge of the Kamloops People Gules the end gradients from the chief clockwise Gules Or Argent and Sable the quarters charged first and fourth of a fawn statant second and third of a salmon leaping Gules.
Crest: On a rock issuant from a circlet of copper proper an eagle Gules its head and breast Argent beaked and membered Or its wings elevated Azure each charged with a wild rose proper edged Argent.
Supporters: On a grassy mound Proper dexter a coyote Argent gorged with a collar of pine branches Vert sinister a fox Gules gorged with a collar of copper beads pendant therefrom three eagle feathers proper.
Motto: WEL ME7 YEWS RE STKEMLUPSEMC

If you have any information on these arms Indian Band of the Shuswap Nation mail us !

Literature : Image and information from http://reg.gg.ca