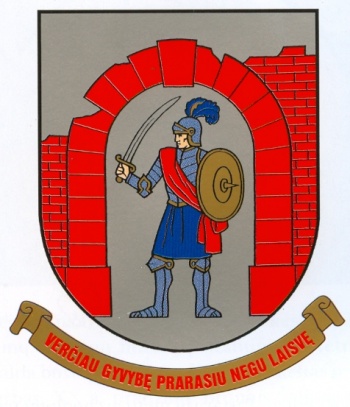 Kernavė has a long and famed history: first time mentioned in 1279, it was one of main centres of early Lithuania, even the capital of Lithuania in late 13th century (a legendary tradition calls Kernavė "the first capital", though historically this is not true, because Vilnius was the capital before). In the late 14th century Kernavė city was destroyed by the Teutonic Order, and its real revival did not happen due to the long war and growth of other cities.

The arms from 1792 intended to express both the famed past and the reality of the late 18th century: a ruined city was like a dying state, but it could be saved by granting freedom to citizens, and it is worth of life.

In the early 20th century another design of the same idea was used, see below. In 1969 the arms were regranted with the design based on that version.

The modern arms are based on the picture of 1792. The original Polish motto “I will loose life rather than freedom” is translated to Lithuanian.