Difference between revisions of "Kirkliston"

From Heraldry of the World
Your site history : Kirkliston
Jump to navigation Jump to search 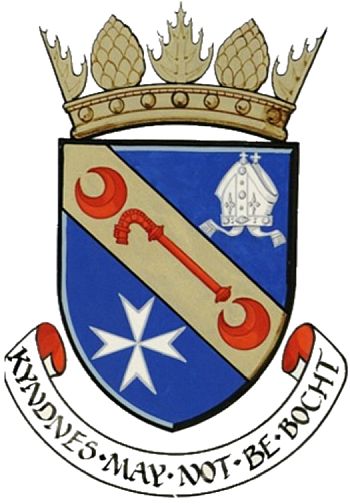 Azure, on a bend Or between a mitre Argent in chief and a Maltese cross of the Last in base, a Celtic crozier between two crescents Gules.

Above the Shield is placed a Coronet appropriate to a statutory Community Council, videlicet:- a circlet richly chased from which are issuant four thistle leaves (one and two halves visible) and four pine cones (two visible) Or, and in an Escrol below the same this Motto "Kyndnes May Not Be Bocht".

The mitre stands for the pre-Reformation Bishops and Archbishops of St Andrews who owned the Regality of Kirkliston, whose court hall was in the village, and became the parish school from 1807 until after 1873.

The blue and gold livery colours are those of the Hopes of Hopetoun, who became the hereditary bailies of the Regality in 1678, succeeding the Setons of Abercorn, for whom two red crescents have been placed on the gold bend.

The Maltese cross recalls that the barony of Liston, in the central part of the parish, anciently belonged to the Knights of St John.
The red quigrich or Celtic crozier on the bend denotes "the guidance of the faithful by the Church and the Knights", over many centuries.

The motto is a sixteenth-century Scots proverb and was a local choice.