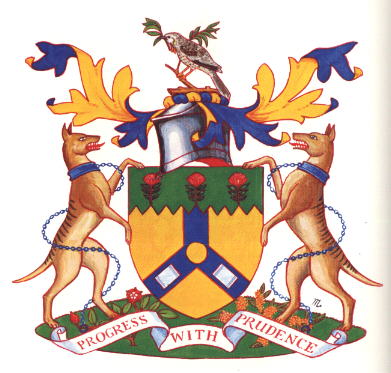 Arms : Or, on a Pall reversed Azure a Bezant in centre point and an Ingot of Tin proper on each of the lower limbs, on a Chief indented Vert three Waratah Flowers stalked and leaved also proper.
Crest : On a Wreath of the Colours, a branch of Gum Tree leaved proper, thereon a Yellow Wattle Bird holding in the beak a sprig of the same also proper.
Supporters : Two Tasmanian Tigers proper, gorged and chained Azure.
Motto: 'Progress with Prudence'.

The gold of the shield refers to the early history of gold-mining in nearby hills. The blue pall represents the junction of the North and South Esk rivers where the city (symbolised by the gold central disc) was founded and the Tamar River flowing north to the sea. The ingots recall the days of tin-smelting in the city.

The green chief and the Tasmanian waratah flowers celebrate the parks and gardens of the city and surrounding lush countryside. Supporters are Thylacine, the extinct "Tasmanian Tiger", and the crest depicts a yellow wattle-bird indigenous to the area, with a sprig of wattle in its beak.