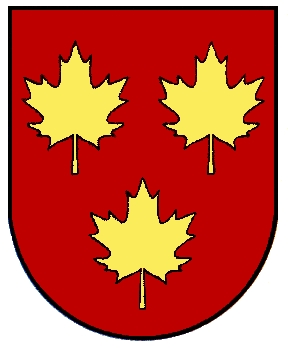 Three golden maple leaves symbolise the famous Lentvaris manor (earlier the property of Tyszkiewicz counts) and its unique park, designed by the French architect Edouard Francois Andre. The park is rich by different species of trees, but predominant are maples. Maples also are predominant in the town.

The council of Lentvaris asked an artist Arvydas Kazdailis to create a coat of arms of the town. The artist created six projects and presented them to the Lithuanian heraldry commission. The commission elected a project with yarn and shuttle, symbolising a carpet factory in the town. But this project was unacceptable for many inhabitants of Lentvaris. They objected, that not only carpets of Lentvaris but also its architecture and nature monuments are well known. Town inhabitants composed a sketch: two horse heads in the centre symbolised the studfarm of the manor.

A ring of small maple leaves in the upper part symbolised a manor park and Klevu aleja (Maples alley) of the town. Several blue winding lines in the lower part symbolised the lake Lentvaris and the carpet factory. This sketch was obviously overburdened. The result of negotiations with the artist and commission is the present arms.