From Heraldry of the World
Your site history : Liverpool (New South Wales)
Jump to navigation Jump to search 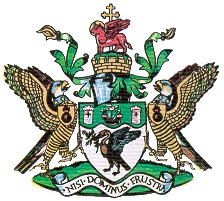 Arms : Argent, a Cormorant wings elevated and addorsed Sable, beaked and legged Gules, in the beak a sprig of Wattle leaved and flowered proper, on a Chief wavy Vert a Lymphad, sail furled, between two Towers also Argent.
Crest : Out of a Mural Crown Or a Mount Vert, thereon in front of a Cross Crosslet issuant Argent a Bull statant, winged Gules, armed, unguled, and nimbed Gold.
Supporters : On either side a Hawk, wings elevated and addorsed proper, beaked, legged, belied, and jessed Or, gorged with a Collar Azure charged with two Estoiles and pendent therefrom an Escutcheon Gold charged with a Grenade Sable fired proper.
Motto: 'Nisi Dominus Frustra'.

The cormorant in the shield is taken from the arms of the city of Liverpool, England. The bird holds in its beak a spray of wattle, the floral emblem of Australia. The wavy line refers to the Georges River and the ancient ship and towers are from the arms of Governor Macquarie, founder of Liverpool in 1810. The ship also refers to the shipping on the river, whereas the towers refer to the military connection of the city.

The crest shows the winged bull, symbol of St.Luke, the patron saint of the local church. The church, founded by Macquarie is also symbolised by the cross.

Literature : Information leaflet published by the city of Liverpool.