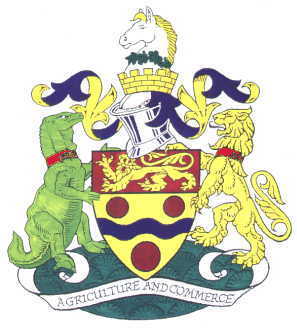 Arms: Or a Fesse wavy Azure between three Torteaux on a Chief Gules a Lion passant guardant Or.
Crest: Issuant from a Mural Crown Or a Horse's Head Argent gorged with a Chaplet of Hops fructed proper, Mantled Azure doubled Or.
Supporters: On the dexter side an Iguanodon proper collared Gules and on the sinister side a Lion Or collared Gules.
Motto: 'AGRICULTURE AND COMMERCE'.

The wavy fess represents the River Medway and the red roundels are from the arms of Archbishop Courtenay, who built All Saints Church, at the end of the fourteenth century. The lion is that of England.

The mural crown represents municipal government and the horse’s head recalls the arms of the Kent County Council. The hops refer to the produce for which the district is famous.

The Iguanodon refers to the town’s prehistoric background, a complete skeleton of this creature having been found within the Borough. The Lion is derived from that in the arms. The supporters originally had scrolls hanging from the collars about their necks bearing the dates 1549, when Maidstone received its first charter of incorporation and 1949, the 400th anniversary.