From Heraldry of the World
Your site history : Market Harborough
Jump to navigation Jump to search 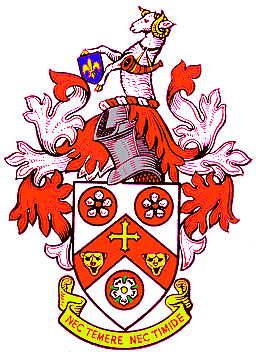 Arms : Argent on a Chevron Gules between three Torteaux those in chief each charged with a pierced Cinquefoil Ermine and that in base with a Rose Argent barbed and seeded proper a Cross flory between two Leopards' Faces Or.
Crest : On a Wreath of the Colours a demi Ram Argent armed and unguled Or gorged with a Riband pendent therefrom by a string of the last a Bugle-Horn Gules and holding between the fore legs an Escutcheon Azure charged with a Fleur-de-Lys Gold.
Motto: 'NEC TEMERE NEC TIMIDE' - Neither rashly nor timidly.

The three red roundels on white are derived form the arms of the Earldom of Harborough, which became extinct in 1859, and were used by the Council before arms were granted. The ciquefoil relates to the arms of the County Council and the white roses represents Northamptonshire, where Little Bowden was once situated.

The ram refers to agriculture, hosiery and the cloth trade and the bugle-horn to fox hunting.

Literature : Image and information from http://www.civicheraldry.co.uk