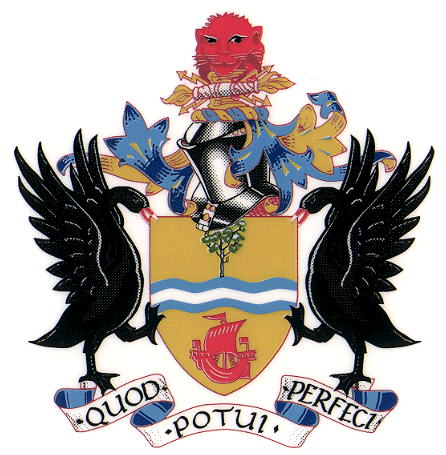 The badge of the State is a black swan on a gold field. In fact it was first known as the Swan River Colony, after the discovery of the birds on the river by European explorers. The wavy lines represent the Swan and the Canning Rivers, which define the boundaries of the City of Melville,
The ship represents the arrival of Captain Stirling in Melville Water in 1827, while the tree alludes to the City's cognomen of 'The Garden City' in recognition of its verdant parklands.

In the crest the thunderbolt represents communication, as this municipality was associated with the development of international telegraphy, through the Wireless Telegraph Station in its area. The lion's face is from the crest of Margrave Melville, First Lord of the Admiralty, after whom Captain Stirling named that stretch of the river.