From Heraldry of the World
Your site history : Mothers' Union
Jump to navigation Jump to search 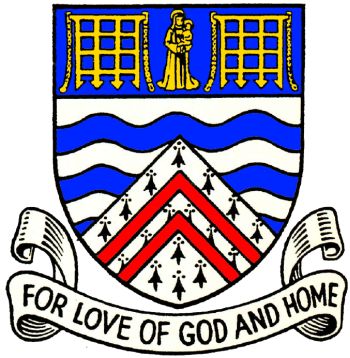 Arms : Per chevron, barry wavy argent and azure, and ermine, in base two chevronels gules; on a chief of the second a representation of the Holy Virgin and Child standing between two portcullis chained Or.
Motto: For love of God and home.

At the top upon a blue background, there is a figure of the Mother and Child, supported on either side by a golden portcullis, these latter being part of the arms of the City of Westminster, London, where The Mary Sumner House is situated.

A portcullis is a gate of defence which can be let up or down in grooves; heavy chains are attached for this purpose. The symbolism is obvious – portcullis is a defence against evils which may attack the home. Below these may be seen blue and white alternative wavy lines which represent the sea, indented by a chevron, or roof tree, in red and white. The chevron is borrowed from the coat-of-Arms of Mary Sumner.