Difference between revisions of "National Arms of Algeria"

From Heraldry of the World
Your site history : National Arms of Algeria
Jump to navigation Jump to search

THE NATIONAL ARMS OF ALGERIA 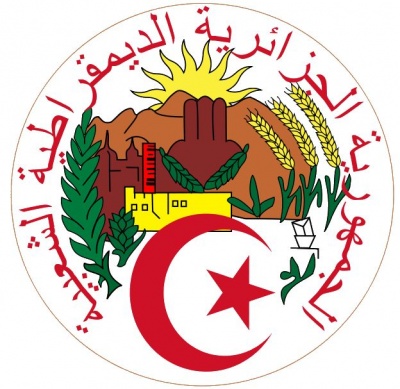 The present State Emblem was adopted in 1976. It was identical to the previous emblem, used since 1971, with the addition of the name of the country in Arabic: الجمهورية الجزائرية الديمقراطية الشعبية .

The star and crescent are the symbols of Islam, and were already present in the older arms.

The hand of Fatima, a traditional symbol of the region, appears in front of the Atlas Mountains, below a rising sun representing a new era. The buildings stand for industry and the plants for agriculture.

The French colony of Algeria started to use arms in 1830, which showed the crescent and three stars. These were continued under the French rule until 1962. From 1962-1971 the country used a coat of arms based on the flag, showin gagian the crescent and star.