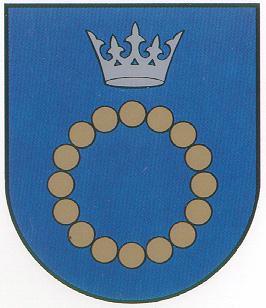 Palanga is one of Lithuania's oldest settlements, and in the 12th century it was an important trading centre. In 1756 the town received special trade privileges and in 1952 Palanga became a city.

There are no historical arms or seals known for the city and the first emblem was designed in 1970. The emblem was based on the historical amber trade in the city. Pieces of amber were also used by local craftsmen to produce jewellery and other items. The amber originated according to legend from the amber palace of Princess Jurate. The princess fell in love with a local fisherman, which angered Perkunas, god of heaven and earth. He thus destroyed the amber palace and all what was left of it were pieces of amber, which could be found on the shore.

The emblem showed a chain of amber under a crown for the princess. The emblem was used only for one year before it was abolished. In 1996 the old emblem was transformed into the present arms.